We were once one thing, a common body with a common purpose. Our time among the living came to an end, but we three remain. What has summoned us mind, body, and spirit to resolve our deaths? And how will we avoid the Reapers who are trying to stop our efforts?

This is a Descended from the Queen* game for three players (no GM or facilitator) about reflection, perseverance, and regrets. Each player is one facet of a greater whole, ripped from their peers by their untimely demise. Wrestling with the questions of the life you had, you are solving the mystery of your own death, all the while staying one step ahead of Death’s agents who would rather you went quietly into that good night.

Play in You Reap What You Sow is card-based, with each card providing a prompt that must be answered. Each player has a suit of cards, with some prompts pushing you to draw from the deck of Reaper cards with other dangers of the afterlife. Turns consist of drawing cards and reading prompts, describing scenes, and coming to terms with your death before the Reapers get you.

This title is still in development, and this version is an ashcan edition: It has text, layout, and art that is still being finalized but the game is 100% playable. We are still taking feedback on the final form of the game and any response you would like to make is valuable to us. Anyone who buys in at this stage will have access to the final version at no additional cost.

This project also serves as a sneak peek at the stand-alone Boneyard game & setting which is currently in development at Nerdhaus Games, which follows stories like this from the perspective of the Reapers and their otherworldly Omens as they maintain the boundaries between life and death.

Content Warning: At the very least, this game is about death, loss, and regret. Depending on how your table answers their prompts, a variety of other topics may be introduced. Some advice is presented in the book regarding safety and consent, but adopting RPG-specific player safety practices is strongly recommended if your current play culture does not usually do so.

*Descended from the Queen games are built off the For the Queen SRD and are generally card-based narrative experiences with uncertain outcomes. This title may differ more from the format than some, but draws its inspiration from the original game.

In order to download this game you must purchase it at or above the minimum price of $5 USD. You will get access to the following files:

Support this game at or above a special price point to receive something exclusive.

Purchase at or above the minimum price to make a copy of the game available for free to someone else in need. For every $3 above the recommended price of $5, you will provide an additional copy to the pool.

If you are experiencing poverty or marginalized access to the gaming community, select this reward to claim a free community copy of the game. 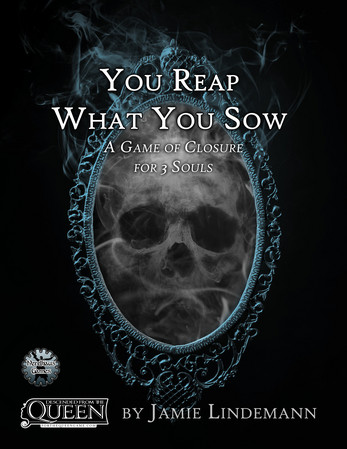 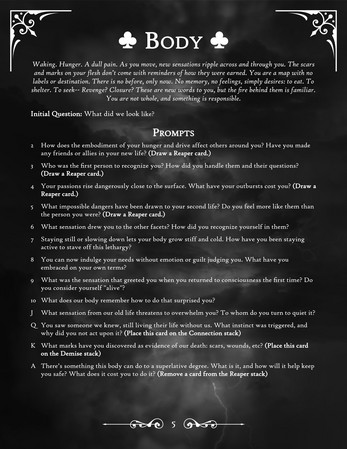